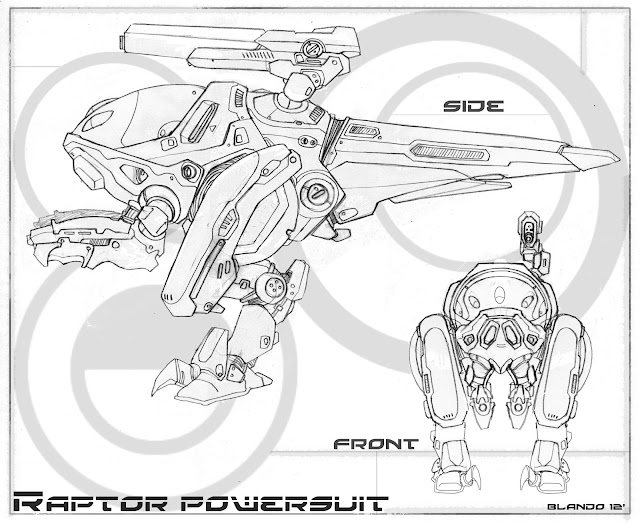 Sheshrawl felt the hum of his battlesuit around him. Eyes darted about, keying in status checks as the on board AI analyzed the battlefield below. Firmly ensconced in the carry bay, he and his packmates were on their way to the ground to assist several other packs of the Caltheed Herd.

The herd had been pinned down by their enemies and his saurian brothers were unable to maneuver away and make use of their speed. The AI on his suit had already received drop zone data from the AI on the Chathra dropper and he was figuring the best drop pattern to deploy his pack in. He would have to make sure that they didn't drop into the field of some of those big pulse cannons but he was going to make sure the enemy would start to pay it's tole as soon as claws hit ground. Nine and one enemy packs and one hand (3) of pulse cannons would have to be dispatched for optimal effect, but there were many more on the ridges overlooking the settlement where the Caltheed Herd had been ambushed.

A klaxon sounded inside his armored cocoon, signalling the dropper was on final approach. His battlesuit AI warbled indicating it had completed its analysis and transmitted the data to his packmate's suits. Their combined AI network would maintain constant real-time analysis of their battle, feeding information to their pilots for optimal effectiveness on the field. Sheshrawl, felt his tail twitch, housed in the tail of the battlesuit and felt the feedback systems confirming his input, despite the tail being held by carry clamps.

With the battlefield rising in his optical feeds, the sound of his packmates began to click and whistle. Thrask, goggled and clucked one of his usual jokes and the hissing and guttering of the packmates could be heard in appreciative response. Then, as quickly as the mirth had come, all went silent, the cunning minds of the predators in their metal avatars honing in on the imminent task.

Lurching into a tight banked turn, the dropper's engines rose up in a growling cadence that vibrated through the hull and into the battlesuits it carried. Grav drives working overtime to bring the dropper into a controlled hover. Clamps released and freed the battlesuits in their carry bays, the only grip that of their talonned feet and the molecular adhesive pads in their soles and as the bays opened from beneath them, the battlsuit dropped down onto the battlefield amid theh ail of fire both friend and enemy...

CHUHUAC BATTLESUITS
GENERAL DESIGN
Like many other Chuhuac designs, their battlesuits capitalize on their advanced technology and unique approach to the ergonomics of their species. At first glance, the battlesuits appear to be nothing more than large approximations of the species that constructed them, and this would not be an unfair assessment.

These weapons are designed to augment the abilities of the Chuhuac in ways that even their advanced biomechanical augmentation can accomplish. Incredible strength, heavier body armor and power enough to move at a speed comparable to that of Chuhuac infantry on the ground. Sensors and an on board AI, make the battlesuits incredible agile and aware, able to take in and process data at the speed of thought,s sometimes faster. Interpretive reflex systems, help protect pilots, kicking in intuitively when the AI detects a threat missed by the pilot.

WEAPONRY
Weaponry is made up of two standard rapid-fire plasma guns, similar to those carried by the infantry as SAWs and two hard points on the back. These hard points can be given any number of loads to carry or left empty if a lighter mission role was desired. Standard weapons include: 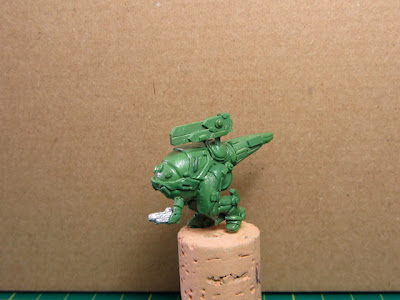 Heavy Plasma Cannon - Essentially a scaled up version of the infantry weapon, this weapon is capable of rapid-fire, launching scores of powerful plasma bolts down range to pin down the enemy, chew up light cover and destroy lighter vehicles and structures. 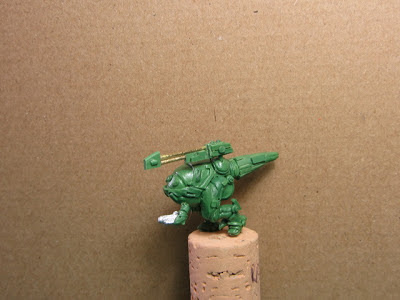 Particle Accelerator Cannon - The heavy-hitter for the battlesuits, this weapon fires an incredibly powerful beam of charged particles moving at near relativistic speeds. The impact caused by these particles is so great that they can disrupt the molecular bonds of a target. The resulting release of energy is usually rather dramatic and produces a spectacular light show as the target is rendered to pieces. 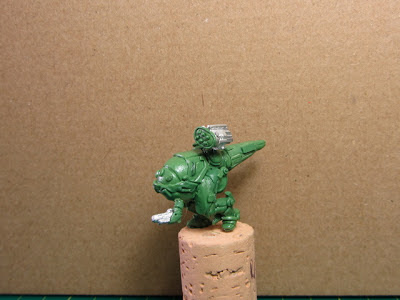 Drone Missile Launcher - The primary indirect support weapon used by battlesuits in support of infantry, drone missiles are guided by the battlesuit's AI. through this control, the missiles can be directed to move around intervening terrain and impact in a variety of nearly limitless patterns. The payload on the missiles is also variable and consists of a flexible sort of proto-matter that can be set for varying degrees of solidity and instability. In this way, a single drone is capable of being used for anti-armor, high-explosive, fragmentation, air-burst and other roles simply by the pilot designating the needed mix of material properties.

OTHER SYSTEMS
The versatility of the Chuhuac battlesuits is one of their greatest attributes and in addition to the more common weapon loads, there are a host of other options utilized for specialize missions. Sensors, stealth systems, even gravitic jump motors have all been utilized in one mission or another. In space, they often employ thruster packs to allow for greater maneuverability. 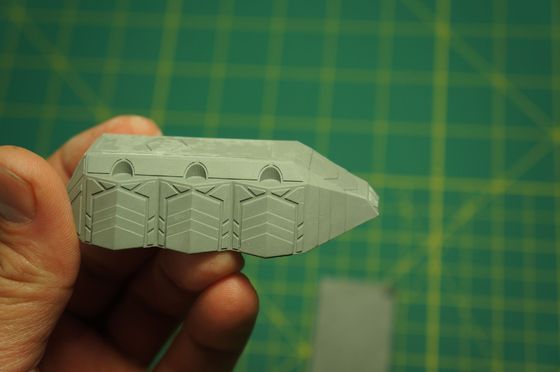 The Chuhuac APC has had a bit of a refit.

While the original printing was good, the tech available for prints has improved while the project has been developing. I took advantage of this extra time to see if a few tweaks to the design and a new print might make a difference. I think it has.

The finished print gives you a really good idea of what a resin model of the vehicle will look like. The material used in these new prints has a similar weight, texture and consistency to the resin being used in good resin models. 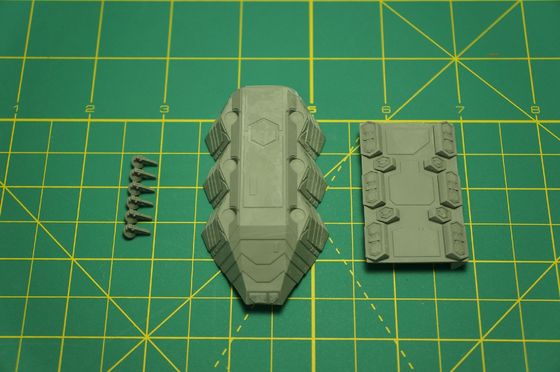