Developing the Ikwen weapons has been a bit of a trick.

The Ikwen range is designed to represent one side of a conflict against an undetermined foe, making them ideal opposition force for any range of miniatures as they are not designed to fight any specific force. This is not special, in itself, but what makes their weapon design tough as a militia force is that they have no pre-made world from which they would have sourced their irregular arsenal. When considering how to arm them, the decision was made to give the Ikwen weapons that were analogous to the weapons seen in terrestrial militia forces, but not human weapons. A balance between form and function had to be reached and with the help of artist Todd Ulrich, I think we did just that. 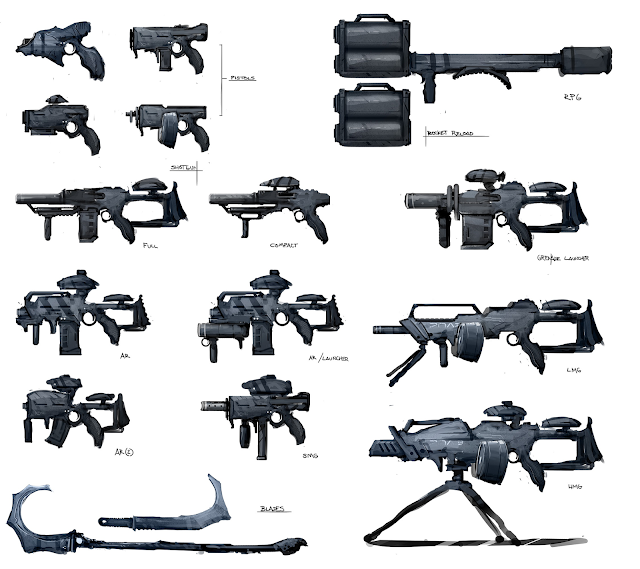 Todd took my notes and together we came up with what you see above. With the exception of the blades (Huli) the other weapons are very much cousins to weapons we know. Assault rifles, submachineguns, shotguns, and the rest of the cast are here. All familiar, but looking like they were made in a factory far away. This will allow them to fight any force of miniatures enemies and not have to worry about having weapons that are too human or too alien.

In a lot of ways the weapons were picked based on how they would look in the hands of miniatures. I can see Ikwen swinging around their Huli or lugging around the suitcase-like reloads of their rocket launchers while they scurry around, snapping off shots with their rugged assault weapons, all in a desperate play to fight whoever players pit them against.

While I had planned to hold off on showing more Ikwen concept art, I decided what the heck. So, in the spirit of holiday cheer and good fun, here are some more pictures of LNG's upcoming new alien species range due out in 2014. 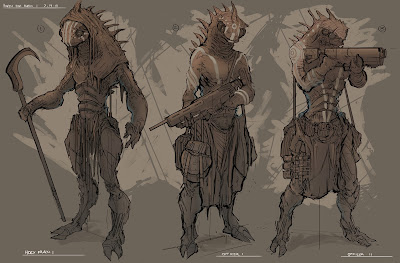 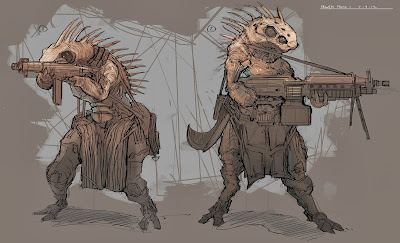 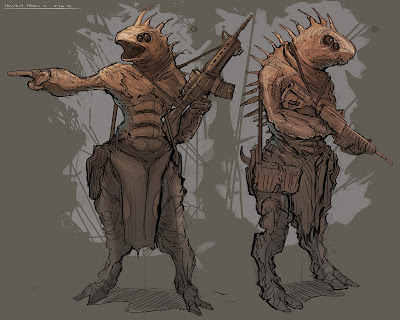 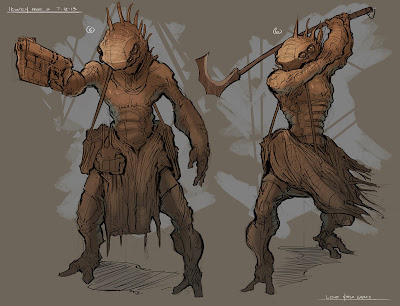 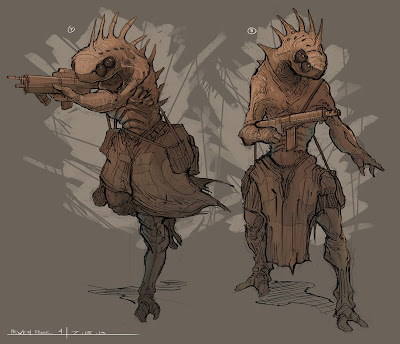 The Future of LNG 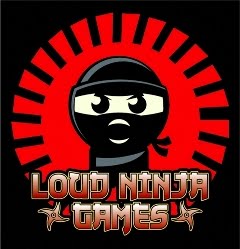 I realize, with the Chuhuac Kickstarter yet to be fulfilled and the range's retail release still pending, that it may seem odd to discuss the future of Loud Ninja Games, but there is a future and I would like to talk about that.

Despite the stumbles and slumps in getting things going, the mindset here has always been for us to turn Loud Ninja Games into another place you can find new and interesting miniatures in an ever-expanding product line. To this end, we have been working to develop future ranges and expansions on the Chuhuac. I have also given thought to the best way for me to present our products to the public and to make sure they are available across the widest area possible.

So, let's take a look at some of what is in store.

RETAIL FUTURE
Before there was a Loud Ninja Games, I had established a working and friendly relation with Gavin Syme ate 15mm.co.uk.. In many ways Gavin has been a major influence in my growth as a sculptor and my development into a miniatures entrepreneur. When it came to considering how I wanted to go about selling my line of figures to the gaming public, he was the obvious person to turn to. The end result is an agreement between Loud Ninja Games and 15mm.co.uk in which Gavin and crew will become the retail source for my line in 2014.

Why did I go this route?

It comes down to simple resources and customer service. 15mm.co.uk is an established company with myriad ranges across a number of subjects and scales. They have in-house mold-making, casting, packaging and retail facilities. Add to this my trust and existing working relationship as well as their knack for serving worldwide customers with quick and fair shipping and it really wasn't much of a decision.

Why not do it myself?

As much as I'd like to, I really cannot and would rather not have to mire myself and my family down trying to manage inventory, sales, packaging and shipping. 15mm.co.uk will be able to keep stock on the shelves, shipping going smooth and a clean and well-managed retail site. I'll still maintain creative control as well as marketing and promotional interests and in return I'll collect a percentage of the sales. Loud ninja Games is still a brand and I'm still in control of that brand, but I've got a big brother (so to speak) in the industry that can help me make it work.

FUTURE OF THE CHUHUAC
The Chuhuac are a range of minis I have wanted to make forever. I have a host of ideas for them, most of which came to fruition in the Kickstarter. Still, there are more troop types and vehicles I would like to add to this range.

Now, allow me to be a bit tentative here, if I may. Just because I would like to make something, doesn't mean the opportunity will present itself or that it would be a good idea. I'll have to see where the market goes with these dino dudes before making any final decisions. Of all the designs I am sure would be well-received, a flying vehicle like a dropship or gunship and a light tank are at the top of the list. After this, new troop types may be in the future and even more vehicles, but that really comes down to how things shape up for the Chuhuac.

Here are a couple of WIP images of what we are planning for our vehicles...

The light attack vehicle in its most basic shape.

And, the gunship/dropship in some very early WIP renders. 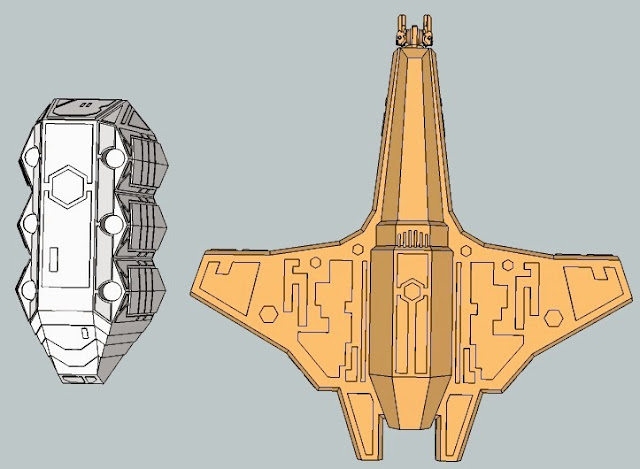 FUTURE RANGES
My vision for the LNG brand has never been about a one-shot with the Chuhuac and then let it ride. I've had host of new species ready in my notebooks for ages and all of them are at least runners up for inclusion in this line as miniatures. The exact order in which they will be released, really depends on how things shape up for the company. Smaller, easier to release ranges and one-offs are always doable while larger, more involved ranges will absolutely have to bide their time or wait for a windfall. I can, however, show you the NEXT release, already in early development. 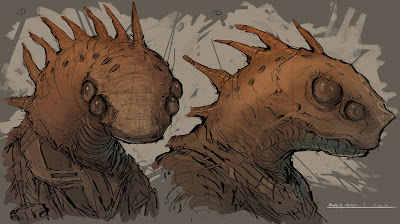 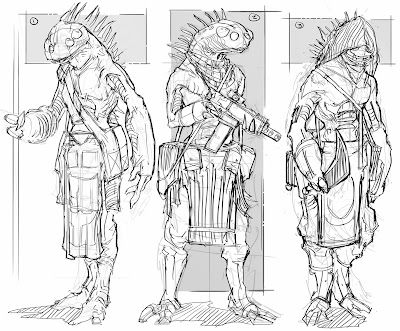 I don't want to say too much about these odd alien humanoids, but these images show off some of their more interesting features. Please, don't pay too much attention to the weapons as they are really just placeholders for the final weapons. More on them as they develop, but they will be released in 2014, hopefully in the first half of the year.

So, there you have it. LNG is definitely thinking forward and the new year will bring new shiny toys from us to you.