More Painted Examples of the Chuhuac

Just a quick update to the blog to show off the latest crop of painted samples that were sent my way from my partners at 15mm.co.uk. Their resident pro-painter has done a splendid job on all of these and I think he followed my notes very well. 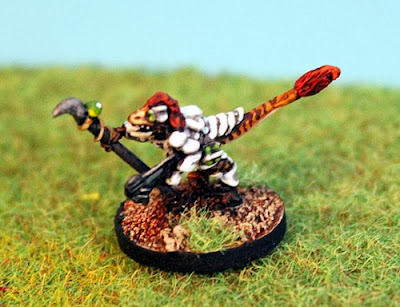 Herdmaster - a company level command figure carrying a staff of office which sports the preserved toe claw of on of the unit's historical elites. 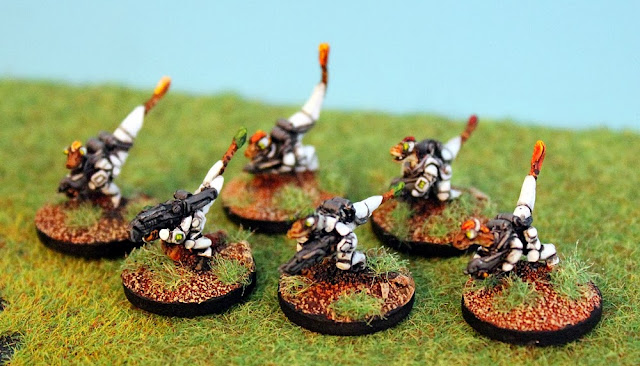 Commandos - this single pack contains six Chuhuac and includes a leader , SAW gunner, and a sniper poised and ready to lay down some hurt with his accelerator gun. The commandos where lighter armor and stealth packs that mask their biometrics as well as provide them with optical camouflage (yes, invisibility). 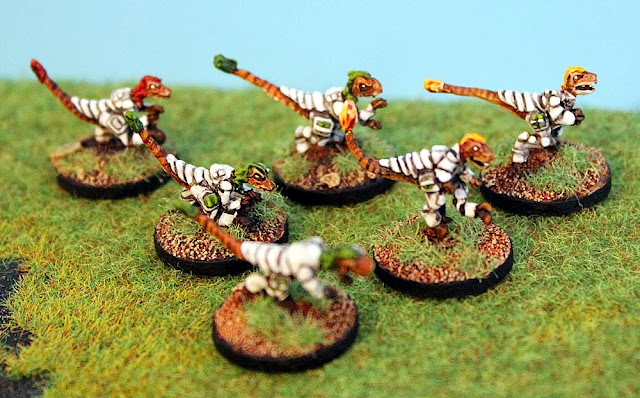 Chuhuac in HTH - These six minis have been posed in various crouching, slashing, biting and kicking poses and depict what a pack of these aliens would be like up close. Because they do not have weapons sculpted on them, it has been noted that they would work well as casualties, gunners, or even as possible vehicle crews. 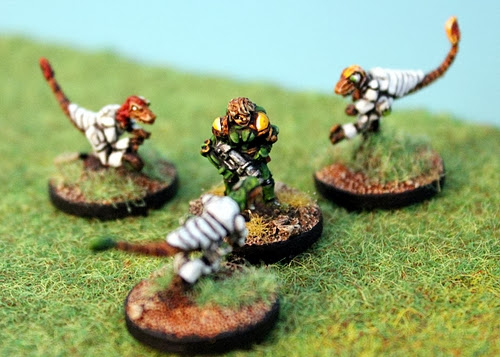 This picture shows how the Chuhuac scale up to one of the 15mm Ion Age miniatures. The Ion Age minis are in the larger category of 15mm figures and so you can see that the chuhuac are at a nice size to blend in with most range. 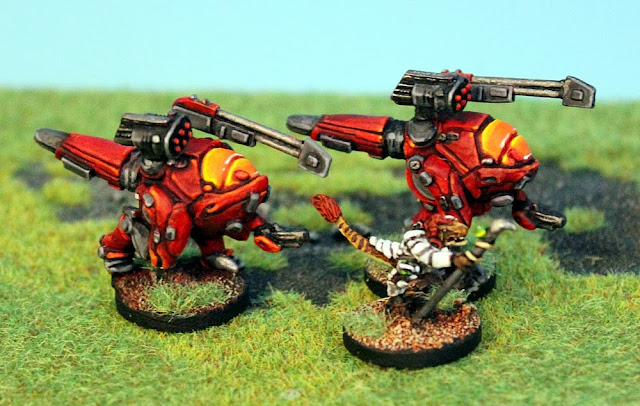 Chuhuac Battlesuits - These are a popular favorite. Each battlesuit comes with two SAW arms and two of each of three support weapons - Drone Missile Pod, Accelerator Cannon, and Heavy Plasma Gun (not shown). The chuhuac pilot is fully enclosed inside the armored body of the battlesuit and uses hi-tech sensors an micro-cams to interface with the outside. The Chuhuac use their battlesuits instead of support weapon teams, allowing them to keep their support weapons as mobile as their infantry. To the Chuhuac, speed and maneuvering is everything. 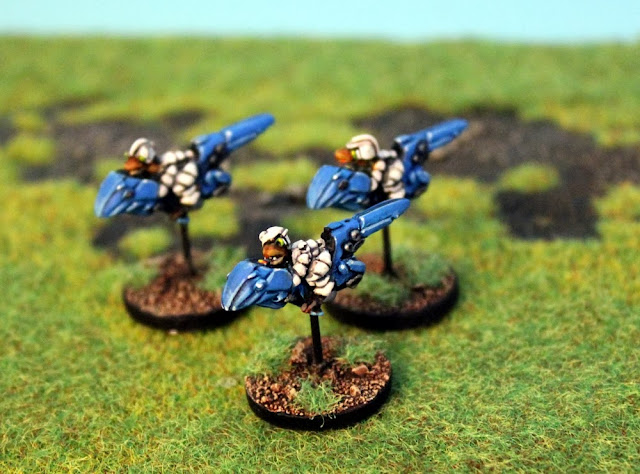 Grav Bikes - These miniatures are two-piece models with the rider's body sculpted on to the bike. There are three variant heads that can be glued on, allowing a bit of animation in the sculpts by adjusting the head positions. The pilots of these bikes steer with their tails which are in the rear section of the bike, leaving their hands free to control weapons and sensors. These bikes are used as scouts and for fast, local air support as each carries the equivalent of four (4) SAWs. 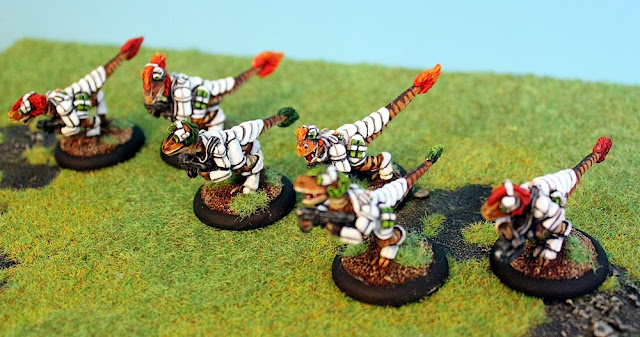 28mm Chuhuac Squad - Many folks had expressed a desire to see the Chuhuac in 28mm. While the main product line was conceived of as 15mm, I thought it would be nice to at least provide a 28mm squad. The 28mm squad is depicts a typical six-member pack of Chuhuac, including Alpha Leader, SAW, and a Plasma Gun. 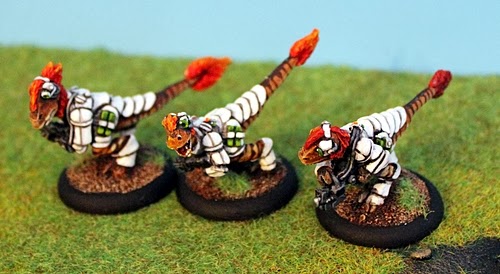 These figures are a beautiful upscaling of the 15mm Chuhuac and are robust and sturdy models. All of the trooper heads are separate, allowing some minor variation by posing them. The Alpha's head is sculpted on depicts the greater amount of plumage the Chuhuac leaders display. 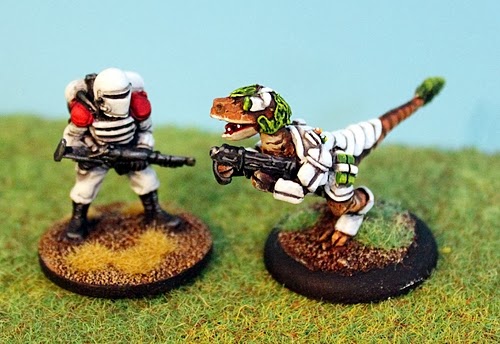 Here is a 28mm Chuhuac, posed next to a 28mm Ion Age miniature.

This morning I received some preview puvs of the painted Chuhuac that will appear in the catalog at 15mm.co.uk. While these do not depict the entire range, they do show the potential for these critters. 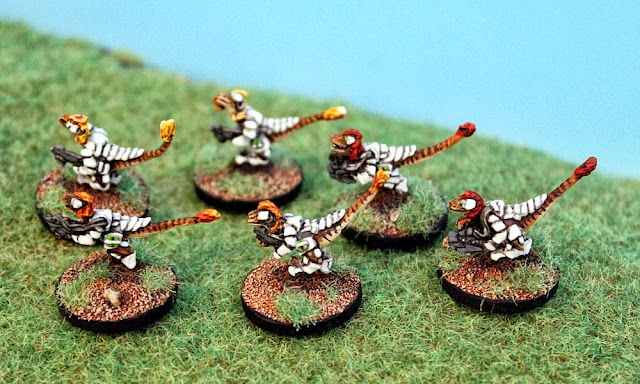 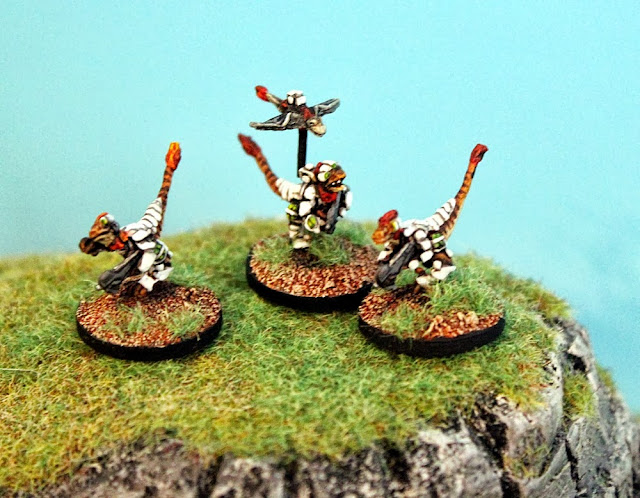 Alright, so for those following along on the blog, I do apologize for the long time since the last post. There hasn't been a lot of interesting stuff to share with you all as we're really into the nitty-gritty of the slogging grunt work of bringing these miniatures to life.

Where are we at?

The current metal production of the Chuhuac stands at about 30% complete at last estimate (about a week ago). The casters report that they are finally getting the hang of the tricky casting and attention these minis demand and have managed to improve their success rate from 45% to 85%. This should speed things up a bit for the remainder of the production run and really makes them a bit more viable as a continuing retail product.

One of the major obstacles to the completion of the production run is that all those delays i ran into have dropped my production smack in the middle of one of the casting company's biggest releases ever, putting me to a secondary position behind their own product, a fact that I am okay with and understand. They have their own time tables and release schedule and while they are doing work for me, I am the one who is off schedule, not them. So, no sour grapes.

I have a set of minis being painted for the catalog shots right now and so should hopefully have some "living color" images to show you soon. I'm also waiting on a couple of sets of the production minis to look over myself. Call this a quality control as the last sets I saw were just the master bits. Though, to be honest, I have to admit I really have no worries about the quality. I just feel it's sort of the thing I should do as a responsible business guy.

We're getting there and the end is almost in site. Soon I'll be pulling my hair out trying to fill all those boxes!

Thank you for your continued support,